A very fine silver plated bronze car mascot modelled as a standing Welsh Corgi in alert pose with very fine hand chased surface detail, fitted on to rectangular base with canted corners, Stamped to underside, Made in England

Pembroke Welsh Corgis are famed for being the preferred breed of Queen Elizabeth II, who has owned more than 30 during her reign. These dogs have been favoured by the British Royal Family for more than seventy years.

The royal corgis are known all across the world and have been portrayed in many ways such as statues and works of art. For example, the crown coin which commemorated the Queen’s Golden Jubilee shows her with a corgi. 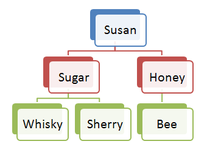 The first three generations from Susan.

The Queen has been very fond of corgis since she was a small child, having fallen in love with the corgis owned by the children of the Marquess of Bath. King George VI brought home Dookie in 1933. A photograph from George VI’s photo album shows a ten-year-old Elizabeth with Dookie at Balmoral. Princess Elizabeth and her sister Princess Margaret would feed Dookie by hand from a dish held by a footman. The other early favourite corgi during the same time was Jane.

Elizabeth II‘s mother, at that time Queen Elizabeth introduced a disciplined regimen for the dogs; each was to have its own wicker basket, raised above the floor to avoid drafts. Meals were served for each dog in its own dish, the diet approved by veterinary experts with no tidbits from the royal table. A proprietary brand of meat dog biscuits was served in the morning, while the late afternoon meal consisted of dog meal with gravy. Extra biscuits were handed out for celebrations and rewards.

Crackers (24 December 1939, Windsor – November, 1953) was one of the Queen Mother’s corgis, and nearly a constant companion; he retired with the Queen Mother to the Castle of Mey in Scotland. In 1944, Elizabeth was given Susan as a gift on her 18th birthday. Susan accompanied Elizabeth on her honeymoon in 1947. The corgis owned by the Queen are descended from Susan. Rozavel Sue, daughter of Rozavel Lucky Strike, an international champion, was one of the Queen’s corgis in the early 1950s.

The Queen has owned over thirty corgis since her accession to the thrones of the United Kingdom and the other Commonwealth realms in 1952.

The Queen’s fondness for corgis and horses is known even in places such as Grand Cayman; when Elizabeth and Prince Philip visited the island in 1983, government officials gave her black coral sculptures of a corgi and a horse as a gift, both made by Bernard Passman.